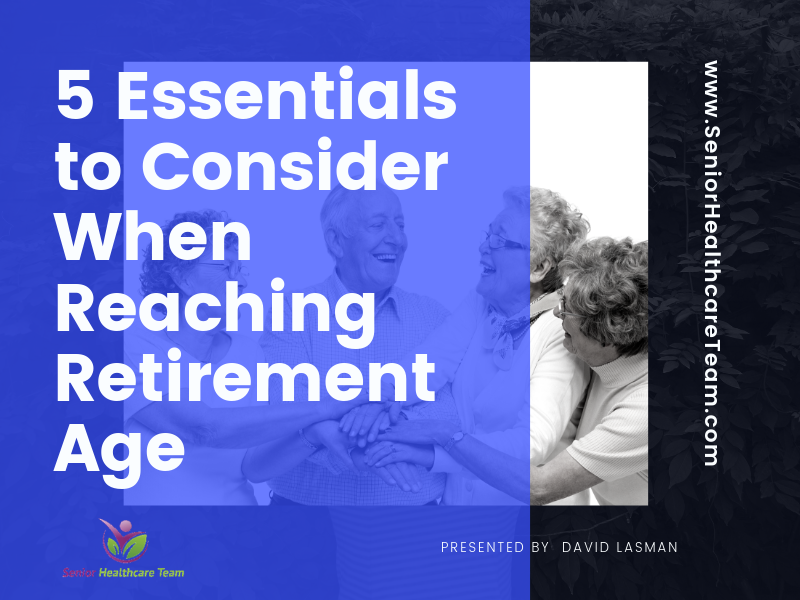 While retirement is supposed to be a relaxing reward after decades of work, it can only become that if you put in some planning ahead of time. No matter how far away that retirement date seems, it pays to be thinking about these 5 things now.

To reap the most rewards from your retirement, it’s important to become knowledgeable about your post-work benefits. That could include knowing how your pension works, calculating your expected income from investments, and learning how you’ll be covered through Medicare. Most notably, however, this retirement education should include knowing when it’s best to start drawing from your Social Security account.

Depending on Social Security for all of your retirement costs can be disastrous, and you might reap more money if you delay your withdrawals. “A lot of people have the perception that Social Security would take care of them,” Clarence Kehoe, executive partner in accounting firm Anchin, Block & Anchin, told USA Today. Originally, that was supposed to supplement one-third of your retirement income, along with personal savings and pensions (which are largely nonexistent today.) In other words, it was never supposed to be the full funding for your golden years.

If you’re in poor health or run into financial obstacles, you might need to start relying on Social Security as soon as you’re able. But if you can hold off, the reward can be significant. “From my perspective, most people are better served waiting until closer to 70 to activate Social Security benefits. The difference in payout even from age 68 to 70 is often as much as $1,000 per month,” Jason Flurry, a certified financial planner at Legacy Partners Financial Group in Woodstock, Georgia, told CNBC.

As with all financial planning, your situation will be unique. The Social Security Administration offers several tips to help you decide when you should begin withdrawing Social Security benefits.

Yes, most logical wisdom says that retiring as late as possible can be a financial benefit. However, some retirees who carefully made a plan for their golden years say their only regret is not retiring earlier. According to Time, half of retirees between the ages of 62 and 70 with at least $100,000 in assets wish they had retired earlier.

“As people age, they realize that during the time right before they retired they still had as much energy” as they did in the years during their career, David Cruz, a senior managing director at New York Life, told Time. As that energy wanes, retirees sometimes regret wasting that potential time off when they could have been spending it with family, traveling, or fulfilling other retirement goals in full health.

Bottom Line Inc. reports that many retirees naturally spend less during their retirement than they did in previous years. Those dollars saved could have translated into an earlier retirement age without even realizing it. As long as your health care costs are accounted for, most older Americans spend less on goods and services as they age, which could allow you to enjoy a great number of years in healthy retirement.

Many retirees eventually move into a smaller home, begin passing along mementos to family members, or sell off the possessions they no longer need. After doing so, many say they wish they had decluttered their lives earlier.

“It’s so liberating being free of all that extraneous stuff,” one retiree told Bottom Line Inc. “I just wish I’d done it when I was 50 instead of 70 … well, actually, I wish I never would have bought most of that stuff in the first place.”

Unburdening themselves from oversized homes or mountains of unused items gives retirees the added benefit of putting those funds toward their retirement savings. A few thousand dollars wouldn’t be a game changer, but could free up the budget for travel or other hobbies in retirement.

The only caution here is to hold on to financial documents or files related to a past profession, such as a doctor or dentist. Kiplinger suggests some of those are required by law, while others (such as past tax filings or documents from a home improvement project) can be necessary years later.

Deciding where to live out your golden years can be a tough decision, especially if your family is spread out. You might pick up and move to be near your children and grandchildren, only to be disappointed when it’s not the Norman Rockwell painting you had imagined. On the flip side, you might regret those lost years if you decide against moving, only to find it’s too late to relocate when your health declines.

No matter what, many grandparents told The New York Times it was important to evaluate their own social connections, before moving and relying completely on their family to fill that gap. Evaluating your relationships with your adult children, and establishing healthy boundaries if you do move closer, are vital.

If you’re instead choosing to move to a warmer clime in retirement, Kiplinger suggests taking smaller steps before selling your home and possessions to move to Sarasota. The company suggests taking extended vacations before retirement to make sure you like the environment, the people, and the new location before fully committing. Otherwise, you might end up like the ranks of retirees who move, only to relocate again when the retirement destination didn’t satisfy.

You pay taxes on everything, from the clothes you buy to the home you live in and the income you make. Not accounting for those extra costs can be a huge mistake when it comes to retirement.

This is especially true when it comes to making withdrawals from your retirement accounts. Most notably, you’ll pay hefty taxes on withdrawals from 401(k)s and IRA accounts if you take the money before you reach the eligible ages. Withdrawing the funds will typically incur some form of taxes, though they can be mitigated with the right financial strategies.

“Retirement planning, especially withdrawal, can be like a Rubik’s cube,” Kirk Cassidy, co-president of Senior Planning Advisors in Farmington Hills, Michigan, told The Washington Post. “You can solve the blue side, then you have a problem with the orange side. It can be complex. We want to make sure we take distributions from the right source at the right time at the right ages.”